On Christmas Eve at 4 pm. I finally finished preparing our Christmas dinner and was concerned because I still hadn’t accomplished my Christmas “mission”, which consisted of each family member helping someone in need and then bringing the story to share around the dinner table.

So, after setting the table I went out. It was rainy and the streets were deserted. As I walked in our neighborhood, I prayed for God to lead me to someone who I could help. I thought to myself, what if I don’t encounter someone between now and 7pm? With these thoughts in my mind I continued to walk around and asking God to help me with my little mission. As I got near a bus stop in front of a public hospital I saw a skinny, poorly dressed woman sitting on the bench. I sat by her and asked her name. She asked me why I wanted to know her name. I thought to myself, man, she is so rude! My first instinct was to leave her alone but I thought what if this is the person that God is sending my way? So I insisted. I told her my name and started a conversation. She wasn’t very friendly. It took some patience on my part to discover a few things. Maria is 52 years old but looks much older. She had been living at this bus stop for over a month. She came from the rural city of Catende, about a two-and-a-half-hour drive from Recife. She had come in an ambulance with a man with whom she was living and who was very ill. The man spent three days in intensive care and then passed away. Maria had nowhere to go. She stayed right there, in front of the hospital where he died and made the bus stop her home.

I asked her if she knew it was Christmas Eve, she nodded. I asked her if she would like a gift, she said yes, a shower! I was a little surprised she didn’t ask for money. I promised her I would come back the next morning to take her to the church building for a shower. The following morning Mike and I walked to the bus stop and there she was. She had just a few belongings in a plastic bag. She had wounds on her legs and feet, lots of lice, and some kind of rash on her skin. We took her in and she got cleaned up. Afterwards we went to eat and from there on I visited Maria many times at that bus stop. Every time she would open up a little more. I became very anxious about leaving her there all alone. It was a dangerous place. During the night there are a lot of drug addicts and people that roam the streets to steal and do evil things. I was very concerned about Maria’s safety; she had no documents, no friends, no one in Recife. Sometimes I wondered if she would be alive the next day.

At first my plan was to convince her to go back to her city but for some reason she didn’t want to go. Later, I found out that a man had taken her documents and bank card and was stealing her small pension. He threatened to kill her if she showed up there. He is a loan shark that takes advantage of vulnerable people.

She told me also that she had a biological son that lived in Catende, but she had given him away when he was born because she was just an unwed teenager. With God’s providential help I was able to locate him. However, I found out that he knew the loan shark so I didn’t know if her son might be involved as well. We weren’t sure. I contacted the authorities in Catende and asked for help for her.

But they were slow in helping. That was when we decided we needed to find a place for her in the meantime. We found a hostel downtown and rented a small room for her. She has been living there since February 1st. She looks so much better. Her legs wounds are healed. She can’t read, so I am studying the Bible using a kid’s Bible with mainly pictures. I once asked her, Maria did you know that God loves you? She said, “No, I didn’t know that!” 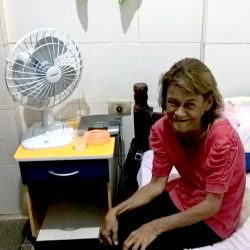 We took a trip to Catende with Maria and with the help of a judge there we were able to recover her documents and her bank card. She receives a small pension and the church helps with food and medicine. And that is how she is living now. She can walk from her place to the church building on Wednesday and Sundays. Our church has shown a lot of love towards her.

The judge suggested that we take care of her till the end of April and then she would move back to live with her son. Maria and her son agreed. But since we got back from this trip she keeps telling me she changed her mind and that she is not going to abandon me! It is kind of funny and cute that she thinks this way. I would like to see Maria become a Christian before she moves back. I pray she understands the gospel and opens her heart to Jesus. Pray for Maria while God works in her life.

We received a very encouraging note from a city clerk looking into Maria’s case:
“A true Christian plays the part of a pastor and goes after the sheep. Many Christians in their nice cars and homes, living a very luxurious life but don’t visit, nor care for the forgotten: those who are in prison, in hospitals, in the streets. Soon the Lord will come and will ask us face to face: “Did you visit me?” The work that you are doing is very good and wonderful. Please continue. May our God protect you always. Christ is returning!